Economic Survey of Latin America and the Caribbean 2004-2005 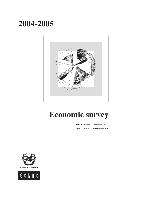 Economic Survey of Latin America and the Caribbean 2004-2005

This year's edition of the Economic survey of Latin America and the Caribbeanis the fifty-seventh in this series. It is divided into two parts. The first analyses the main features of the regional economy, while the second examines the situation in the individual countries of Latin America and the Caribbean. The full statistical appendix is published in electronic format for ease of data processing. Part one deals with the performance of the region's economy as a whole and begins with an introductory section that analyses recent changes in some aspects of the region's trade linkages and financial position. This section then goes on to discuss the macroeconomic policies being pursued by many of the countries, together with their implications for the region's growth. The following chapters are devoted to the international situation and the external sector, macroeconomic (fiscal, exchange-rate and monetary) policy, and the region's performance (level of economic activity, inflation, employment and wages). It includes sidebar boxes on such issues as the restructuring of Argentina's external debt and the progress being made under the Heavily Indebted Poor Countries (HIPC) Initiative. These analyses highlight important factors in the current economic environment and, more specifically, in the effort to reduce the region's vulnerability. The main link between economic development and social development is the labour market. This market has performed poorly in recent years, and a special chapter on the topic has therefore been included in this edition of the Economic survey. In this chapter, after a brief review of recent trends in the region's labour markets, the discussion moves on to labour and employment policy options for improving job creation and employment conditions. Part two provides overviews of macroeconomic policies and trends in the Latin American and Caribbean countries in 2004 and the first half of 2005. These country reports include tables on the main economic indicators.