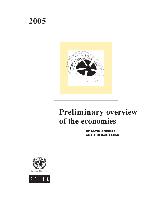 This annual publication, one of the most important of ECLAC, includes official country figures up to November 30th, and an analysis of developments in the region's economy in 2005 and projections for 2006. The Latin American and Caribbean economy grew by 4.3% in 2005, which represents the third consecutive year of growth in the region. Per capita GDP is estimated to have risen by about 3%. Unemployment rate fell from 10.3% in 2004 to 9.3% in 2005 and poverty indices decreased from 44% in 2002 to 40.6% in 2005. The performance of the domestic demand and the expansion of 3.3% of the world economy in 2005, contributed to these results. For 2006, GDP growth for Latin America and the Caribbean is projected to come in at about 4.1%; this rate would be high enough to bring about an annual average growth rate above 4% during 2003-2006 and an accumulated growth of 11% in per capita GDP. However auspicious, it can not be ignored the fact that the region is growing at lower rates than developing countries as a whole, whose GDP is increasing at an average rate of 5.7%, for the period 2003-2006. Latin American and Caribbean sub-regions show distinctive behaviours, being Southern Cone and the Andean Community countries those who register higher growth. Venezuela (9%, Argentina (8.6%), Uruguay (6%), Chile (6%), Peru (6%) and Panama (6%) posted the highest growth rates in the region. ECLAC highlights as a distinctive characteristic of this period of growth the increasing surplus in the current account balance of the balance of payments, fact without precedents in the economic history of the region in the last half century. In 2005, the balance of the current account will be positive and equivalent to 1.3% of GDP (0.9% in 2004 and 0.5% in 2003), presenting, however, differences among sub-regions. The improvement in the terms of trade and the migrants transfers help to explain the evolution of the current account. The world economic growth and the increasing participation of China, India and other Asian economies, improved the terms of trade of South American countries (31% increase between 2005 and the 1990 decade), and, to a lesser extent Mexico (22% increase in the same period). Although in regional terms investment increased in 2005, its levels are still below the ones recorded in 1998. Growing at higher rates, an indispensable requisite to faster reduce the unemployment rate, demands an important increase in the investment rate. The governments of the region are taking advantage of the favourable conjuncture to improve fiscal accounts. As fiscal revenues increase, the surplus is being used to reduce public debt, which is seen by ECLAC as a positive sign. Although the public debt/ GDP ratio is still high in many countries, its decrease leads to a lower external vulnerability of the region, with the exception of some Caribbean countries. Sustained growth in the past three years starts to impact positively in the labour markets, contributing, however in a very recent manner, to alleviate the difficult social situation of Latin America and the Caribbean. The rise in employment combined with a lower dynamism in the supply of labour force, allows for the reduction of the unemployment rate in a context of an increase of formal employment in the region. The Preliminary Overview of the Economies of Latin America and the Caribbean is an annual ECLAC publication prepared by the Economic Development Division in cooperation with the Statistics and Economic Projections Division, the Commission's sub-regional headquarters in Mexico City and Port of Spain and the ECLAC offices in Argentina, Brazil, Colombia and Uruguay. The report also reflects the valuable input received from the central banks and national statistical offices of the countries of the region, which provide the statistical information that serves as a basis for its preparation.