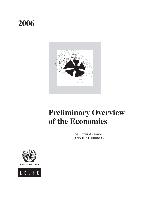 Summary An economic growth rate of 5.3% is estimated for 2006, which means that the Latin American and Caribbean region will mark a third consecutive year of growth at over 4%. Thus, the region has again performed well in comparison with past periods, but it continues to fall short of other developing regions. With the international environment remaining favourable, the volume of goods and services exports was up by 8.4% for the region as a whole and the main export prices rose, which translated into a terms-oftrade improvement equivalent to over 7%. As a result of these income gains, and of increased remittances from abroad, growth in national income (7.2%) again exceeded GDP expansion. In addition, other factors, such as growing investor and consumer confidence after several years of sustained growth, real interest rates that remained relatively low despite recent hikes in many countries, a stronger boost to public spending, an expansion in total wages driven by rising employment and a modest upturn in real wages, have helped to make domestic demand into an additional engine for growth. In fact, domestic demand rose by 7.0%, with gross domestic investment up by 10.5% and consumption by 6.0%. Public spending rose in several countries as a result of larger investments in physical and social infrastructure and higher current spending. But since fiscal revenues climbed even more steeply, the prevailing picture shows central governments with higher primary surpluses (up from 1.7% to 2.2% of GDP as a simple average of 19 countries) and narrower overall deficits (from 1.1% to 0.3% of GDP). Alert to changes in international interest rates and to the effects of surging domestic demand and rising fuel prices, many countries' monetary authorities raised benchmark rates, especially in the first half of the year. In most cases, this did not slow economic activity, given the abundant liquidity. Nevertheless, inflation decreased in most of the countries and, in weighted terms, it came down from 6.1% in 2005 to 4.8% in 2006. Many countries had to deal with downward pressure on the exchange rate because of large inflows of foreign currency generated by stronger export prices or remittances. They took different steps to contain the effects of these inflows but, overall, most local currencies appreciated slightly (3.5% on average). Fuelled by sustained economic growth, job creation continued, especially in waged employment. A half percentage point increase in the employment rate was partially offset by a rise in labour market participation. As a result, open unemployment continued the downward trend begun in 2004, albeit more slowly, with a drop of 0.4 percentage points taking the rate to 8.7%. In contrast to the pattern of the last few years, real wages also benefited from increased demand for labour in 2006 and formal sector wages rose by some 3% as a regional average. The value of the region's merchandise exports rose by 21% and its imports by 20%. Together with higher transfers (over US$ 9 billion net), this improvement of the balance of trade in goods was more than enough to offset the widening deficit on the factor and non-factor services accounts. Hence, the balance-of-payments current account surplus increased from 1.5% of GDP in 2005 to 1.8% in 2006. The capital and financial account surplus was smaller than the previous year, at US$ 230 million. This result reflected external debt-reduction policies, together with the development of domestic financial markets and the accumulation of assets abroad. It also reflected a sharp fall in net foreign investment, which owed much to the Brazilian acquisition of a Canadian firm, while capital flows into the region in the form of foreign direct investment were down slightly in comparison to 2005. The average regionwide performance masks large differences between and within countries. In particular, the international environment has affected exporters of high-demand natural resources, especially in South America (and petroleum-exporting countries in other subregions), in a very different way to the other Latin American and Caribbean countries. In the light of the risks for the region's future economic development, particularly the risk of a hard or soft landing in the global economy, many countries in the region have taken steps to reduce their vulnerability. Such measures include adopting more flexible exchange-rate regimes, paying down foreign debt, restructuring debt in favour of longer profiles and fixed rates, building up international reserves, strengthening fiscal accounts and reducing the dollarization of their financial systems. Nevertheless, there is no doubt that a global economic slowdown would seriously affect the region's growth and the wellbeing of its population. Economic expansion is expected to slow slightly in 2007, with the regional GDP growth rate projected at around 4.7%. If these projections are borne out, the region's per capita output will show a cumulative gain of some 15%, or 2.8% per year, in the period 2003-2007.