Home » Publications » Preliminary Overview of the Economies of Latin America and the Caribbean 2004
Available in: EnglishEspañol 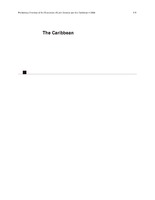 This annual publication, one of the most important of ECLAC, includes official country figures up to November 30th, and an analysis of developments in the region's economy in 2004 and projections for 2005. The Latin American and Caribbean economy grew by 5.5% in 2004, outstripping the most optimistic forecasts, while the region's per capita GDP is estimated to have risen by about 4%. In 2005 GDP growth is projected to come in at about 4%; this rate would be high enough to bring about a further increase in per capita GDP. All the countries except Haiti turned in positive growth rates. For the second time in the past 20 years (the first time was in 1997), all of the region's six largest economies —Argentina, Bolivarian Republic of Venezuela, Brazil, Chile, Colombia and Mexico— posted growth of over 3%. The region's strong economic performance was closely tied to developments in the international economy. World economic activity picked up speed in 2004, resulting in estimated global GDP growth of just under 4% (versus 2.6% in 2003), while the expansion of world trade could top 9% (versus 5.5% in 2003). The United States and China were the engines of this expansion, which contributed to the commodity price hikes that have benefited many countries of the region, especially those in South America, but have hurt the resource-poor economies of Central America and the Caribbean. The propitious international environment played a crucial role in the recovery of the terms of trade, which had already improved by 1.3% in 2003. In 2004 the region's terms of trade rose by 5.6% as a result of a 10.5% increase in export prices and a much smaller (4.7%) rise in import prices. The trends observed in the prices of commodities, especially oil and metals and minerals, were a key determinant of this outcome. Higher labour demand translated into a significant increase in the generation of employment. The labour supply, meanwhile, grew moderately and the unemployment rate fell from 10.7% in 2003 to 10% this year. ECLAC estimates that this slight decline in unemployment, along with an incipient recovery of wage levels, contributed to the small downturn seen in the region's poverty rate, from 44.4% of the population in 2003 to an estimated 42.9% in 2004. The Preliminary Overview of the Economies of Latin America and the Caribbean is an annual ECLAC publication prepared by the Economic Development Division in cooperation with the Statistics and Economic Projections Division, the Commission's subregional headquarters in Mexico City and Port of Spain and the ECLAC offices in Argentina, Brazil and Colombia. The report also reflects the valuable input received from the central banks and national statistical offices of the countries of the region, which provide the statistical information that serves as a basis for its preparation.