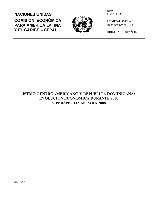 General trends of the recent evolutionEconomic activity in the Central American Isthmus 1 and the Dominican Republic in 2007 expanded 7.1%, four tenths less than in 2006. Thus, the economic growth of the subregion 2 was one and a half percentage points greater than the registered average of Latin America and the Caribbean. In terms of GDP per capita, growth was 5%. This performance represents a continuation of the expansionary phase of the economic cycle that began in 2004, characterized by an improvement in the majority of the economic and social indicators and linked to the positive evolution of the U. S. economy during this period. However, the deterioration in the external macroeconomic context —in particular, the decrease in the rate of growth of the U. S. economy and the price increase in petroleum and certain raw materials— has adverse repercussions for the evolution and prospects of the subregion in 2008. Consequently, for this year, a deceleration of the growth of economic activity is envisioned within the context of inflationary pressures in the subregion.