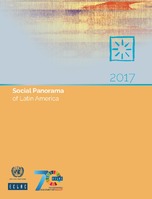 In this edition of Social Panorama of Latin America, ECLAC has addressed the questions posed by the countries of the region in three major areas: income inequality between individuals and households and how these relate to labour market dynamics; the evolution of poverty and its determinants; and the effects of pension systems on equality. The poverty analysis in this 2017 edition is based on a major update of the methodology used; this offers improved comparability between countries, which is an essential input for conducting an overall analysis of how poverty and its determinants have evolved. This effort has led to the creation of a new regional data series. The new statistical series using the national data will be made public by ECLAC in the first half of 2018 once the consultations with the respective countries have been concluded.
In this edition, as well as continuing the analysis of the dimensions of social inequality given in previous years, Commission presents a new study of the demographic context and labour market inequalities, and how these relate to the coverage and quality of pension benefits.

We would appreciate your opinion on this document