Home » Publications » Inclusive social development: The next generation of policies for overcoming poverty and reducing inequality in Latin America and the Caribbean
Available in: EnglishEspañol

Inclusive social development: The next generation of policies for overcoming poverty and reducing inequality in Latin America and the Caribbean 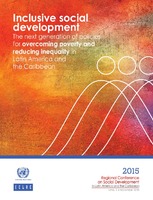 The Latin American and Caribbean region has achieved notable social development in the past decade. However, much remains to be done. The persisting challenges of defeating poverty once and for all and significantly reducing inequality are not only ethical imperatives but also conditions for making progress toward sustainable development, consistently with the recently adopted 2030 Agenda for Sustainable Development.
Although the global economy is more complex and uncertain now than in previous years, and prospects for the region are not —in the short term, at least— particularly bright, it is crucial to secure the progress made in social development in the past decade and lose no time in tackling unresolved issues in areas where progress has been insufficient.

Social issues are not played out in the social sphere alone, however, but also in the economy, politics and the environment. Neither are production diversification and structural change achieved exclusively through the economy: economic prosperity also hinges on inclusive social development and better living standards. This view is one which weaves together the Goals set forth in the 2030 Agenda for Sustainable Development, to which the countries of Latin America and the Caribbean have pledged. The Economic Commission for Latin America and the Caribbean (ECLAC), in turn, has pledged to support and accompany them in this task and the Regional Conference on Social Development in Latin America and the Caribbean, to be held in Lima, on 2-4 November 2015, represents a contribution to that end. The Commission’s analysis of the themes to be discussed at the Conference are set forth in this document.