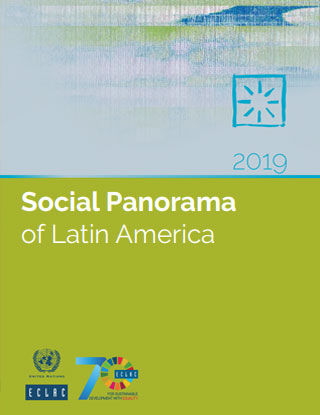 This edition of Social Panorama of Latin America offers the customary analysis of trends in income inequality, poverty and social spending in Latin America, and includes an analysis of migration, which has moved up the region’s political and social agenda.

Continuing the upward trend that has been recorded since 2015 in Latin America, 30.1% of the region’s population was below the poverty line in 2018, while 10.7% lived in situations of extreme poverty – rates which are seen rising to 30.8% and 11.5%, respectively, in 2019, according to ECLAC’s projections. ECLAC’s study also indicates that inequality in income distribution – expressed in the Gini index, based on household surveys – has continued to trend downwards. However, if the Gini index is corrected utilizing other sources of information, which are better able to capture the income of the wealthiest 1%, it can be seen that inequality is higher and the downward trend is attenuated when compared with the estimate made on the basis of household surveys alone. In another vein, the Social Panorama of Latin America 2019 indicates that social spending by central governments rose from 10.3% to 11.3% of GDP between 2011 and 2018, reaching 52.5% of total public spending.The study warns that it is precisely those countries with the lowest levels of social spending that face the greatest challenges to achieving the 2030 Agenda’s targets.

The report concludes that policies for social and labor inclusion are needed to eradicate poverty and reduce inequality and the vulnerability of low- and middle-income strata. This also requires a labor market that guarantees quality employment and decent pay, eliminating women’s barriers to labor insertion, and strengthening the development of comprehensive and universal social protection systems in the framework of Welfare States centered on rights and equality.