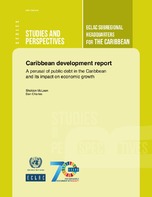 This paper examines the genesis and evolution of debt and debt overhang in the Caribbean with individual case studies, to extract lessons and make broad recommendations with regard to appropriate mechanisms and policy measures that can be implemented to reduce the debt burden of the subregion. The econometric model utilized in the paper has shown that a one percent increase on debt to GDP ratio causes a 0.015decline in real GDP growth for the countries in the Caribbean panel, suggesting that debt has a pernicious effect on growth on Caribbean economies. What is even more worrisome was that Caribbean economies did not demonstrate the traditional non-linear (bell-shaped) effect of debt on growth, where there is a range in which a positive relation between debt and growth exists. Traditionally, as debt increases, so does economic growth, up to a point. After this maximum point is passed, the relationship turns negative, where increases in debt cause a decrease in economic growth. In contrast, using the Caribbean countries selected in the panel over the period 2000-2015, it was empirically found that, at all levels, increases in debt resulted in a decline in economic growth for Caribbean economies. It was also shown that the financial crisis negatively affected growth in the Caribbean, lending credence to the view that Caribbean economies are exceedingly vulnerable to exogenous economic shocks.