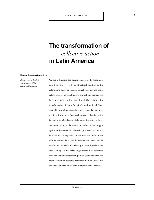 We are witnessing the disappearance of the traditional
paradigm that viewed the structural position as the
determining factor in shaping collective action and social
actors. Because of the structural and cultural changes that
have occurred in the world and the region -the
transformation of Latin America's weak national Statecentred
industrial society and the break-up of the traditional
relationships between State and society- collective action
is tending to take shape mainly along four axes: political
democratization; social democratization or the struggle
against exclusion and for citizenship; the reconstruction and
international reintegration of national economies or the
reformulation of the economic development model, and the
redefinition of a model of modernity. As a result, social actors
are becoming less wedded to single causes, more concerned
with sociocultural issues than politico-economic ones, and
more focused on demands concerned with quality of life
and inclusion than on projects of broader social change.