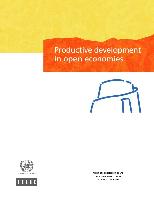 The countries of the Latin American and Caribbean region have shown a keen
and lasting interest in mechanisms of economic development and public policies for its
promotion. This is a process in which ECLAC has been involved ever since it was founded
over half a century ago. Today, the debate on these issues continues against the backdrop
of a globalization process in which the remarkable dynamism of some dimensions
-especially its economic, financial and cultural aspects- contrasts with the
slow formation of an institutional network capable of coping with the increased
interdependence of nations on various levels and of gradually rectifying the striking
asymmetries of the global order.

Over the past two decades, the Latin American and Caribbean region has
wagered heavily on its integration into the global economy. In fact, of all the developing
regions of the world, it has been the most resolute in its pursuit of economic
liberalization. A review of this period brings to light a number of extremely important
achievements, but it also reveals areas in which the region is lagging behind and others
in which unfinished business remains. ECLAC contends that the region must build upon the
progress it has already made, but it also has to close existing gaps and address
unresolved issues. The inroads made in these areas may play a vital role in consolidating
the region's fuller integration into the world economy and in ensuring that the
social, economic and political costs of the economic reform process have not been incurred
in vain.

In order to accomplish this, the "more market and less State"
approach that guided the economic reform process must give way to an emphasis on properly
functioning markets and quality in governance. This new approach, which entails the use of
active public policies capable of overcoming both market and government failures, can
prove to be more market-friendly than the line of reasoning that was the driving force
behind the initial reforms. These active public policies must be backed by the political
legitimacy afforded by democratic institutions and must be founded upon public
transparency as well as efficient, effective government programmes subject to strict
oversight and evaluation.

This is the general framework for the proposal put forward in this
analysis of strategies for furthering productive development in open economies. As is
customary in the documents prepared by the ECLAC secretariat, an integrated structural
approach has been used. The study is composed of five sections comprising a total of 12
chapters. Part one (chapters 1 and 2); sets the analysis of national productive development
strategies for open economies in its current international context. Specifically, chapter
1 looks at the basic traits of today's international economy. It then goes on to
consider the current status of the international debate on issues that influence how much
manoeuvring room is available to the countries for the design and implementation of their
development policies. Chapter 2 describes the general features of the region's
development process after nearly two decades of economic and institutional reforms. It
also traces the ways in which the other topics examined in this document tie in with the
conceptual framework of the development process. It concludes with a discussion of a
number of strategic courses of action for the promotion of productive development in open
economies. These lines of action revolve around three pivotal and mutually complementary elements: inclusion, modernization and the densification of the production apparatus.

Part two (chapters 3 and 4); deals with the aspects of the macroeconomic
environment and the financial system that have the greatest bearing on productive
development and examines the links among economic growth, investment in infrastructure and
the sustainable development of natural resources. Chapter 3 underscores the importance of
stability, in the broad sense of the term, as a pillar for saving and investment, together
with the crucial role played by countercyclical policies in buffering the effects of real
and financial shocks on economic growth. This chapter also reviews the development of new
risk-management instruments and mechanisms that make it possible to finance innovation and
provide access to, in particular, long-term credit for small and medium-sized enterprises.
Chapter 4 analyses investment in infrastructure and the sustainable development of natural
resources. With respect to the former, the discussion deals with the balance between
infrastructure supply and demand in the coming years, changes in public/private supply
models and critical problems in the area of public regulation. In regard to the latter, an
assessment is made of the relationship existing among the production structure, natural
resources and the environment, as well as the challenges facing the countries and the
opportunities open to them in terms of the sustainable utilization of natural resources,
the introduction of innovations in the fields of biotechnology and clean production
techniques, and the production of environmental and ecological goods and services of value
to the entire planet.

Part three (chapters 5 through 8); is devoted to a consideration of
policies for stimulating productive development in open economies. Chapter 5 examines the
major expansion recently seen in the region's foreign trade activity and the
diversification of its exports in terms of both destination markets and the types and
technological content of export products. It also looks at the various kinds of
instruments that can be used to help the region improve its position within the
international economy, including the growing number of trade agreements that have been
signed in the past few years in order to broaden and consolidate market access. Chapter 6
presents an analytical description of the transition made from, first, supply-side and,
later, demand-side technology policies to a model based on the use of the linkage between
supply and demand to define the most suitable technological development path for each
productive context. It then goes on to propose a typology of strategies for promoting
innovation that takes into account the wide array of situations existing in the region.
The concluding portion of this chapter offers guidelines for increasing the coordination
and complementarity of the various types of policies for promoting innovation and
discusses their characteristics and specific content. Chapter 7 explores the development
and articulation of entrepreneurial capacities in the sphere of production. The concept of
the entrepreneurial process which is implicit in measures and policies for the creation
and modernization of business enterprises is described as it relates to three categories
of firms: large businesses that tend to be more fully integrated into the global economy;
small and medium-sized formally constituted firms, and informal microenterprises. The
discussion then turns to the various policy measures that can be used to foster the
formation of business linkages of various sorts. Chapter 8 considers the objective of
strengthening the production structure by increasing the density of the production,
technological and business apparatus. An overview of the policies employed to pursue this
objective in the past is followed by a description of practices used as part of current
strategies in the region. In addition to analysing some of the aspects of the follow-up
and evaluation of their implementation and impact, policy guidelines are proposed for
strengthening the production structure under the conditions now prevailing in the region.

Part four of the document (chapters 9 and 10); looks at the conflict that
the countries of the region have had to deal with in order to reconcile the flexibility
required by an open economy in order to adapt to an ever-changing environment with the
social protection required by the population in order to cope with the risks associated
with a reorganization of the production structure. Chapter 9 examines trends and prospects
in the region's labour markets, with emphasis on changes in the quality of
employment. The development and current status of the labour market's institutional
structure is outlined, and the possible contribution of job-creation and job-training
policies to an improvement in working conditions and workers' economic security is
assessed. Suggestions are then made concerning steps that could be taken to contribute to
a form of flexible employment combined with social protection mechanisms based on a
fiscally responsible social cohesion covenant. Chapter 10 expands upon the definition of
this covenant to give it a dynamic dimension intended to ensure that the educational
system will adapt to the challenges of competitiveness on an on-going basis. To this end,
it is argued that measures should be adopted to upgrade the delivery and financing of
educational services as a means of broadening access to the sector and boosting its
productivity, attaining higher secondary-school graduation rates, gearing the educational
system more closely to the labour market's requirements and narrowing the digital
divide at the international and social levels.

Part five (chapters 11 and 12); delves into the relationship between
economic development and institutional modernization and the fundamental role that
regional efforts can play in giving the countries of the region more manoeuvring room.
Chapter 11 starts out with an analysis of how institutions have influenced economic growth
and equity, and then moves on to an examination of the institutions associated with a
market economy and the process of institutional change. After reviewing the morphology of
institutions in open and increasingly interdependent economies, the way in which a
political system processes reforms within the framework of democratic institutions is
explored. The twelfth and final chapter looks at the current status of integration
processes in the region. It assesses the important role played in the 1990s by the
region's four imperfect customs unions, both in terms of trade creation (in some
cases with greater technological content); and in relation to the potential for cooperation
on various fronts. It is noted that these processes tended to taper off in the late 1990s
and that more and more countries have decided to concentrate on concluding free trade
agreements with developed countries or regions in order to gain access to those markets.
The discussion concludes with a consideration of the policy options available to the
countries of the region in this connection.

We are hopeful that the proposals set forth here will encourage further
analysis of a subject of such vast political, economic and social importance in the world
of today and that they will serve as a stimulus for debate at this thirtieth session of
the Economic Commission for Latin America and the Caribbean.