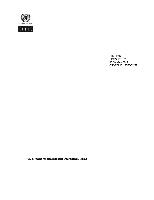 The energy sector is a dominant one in Trinidad and Tobago and it plays an important role in the twin-island republic‟s economy. In 2008, the share of the energy sector in gross domestic product (GDP) amounted to approximately 48% while contributing 57% to total Government revenue. In that same year, the sector‟s share of merchandise exports was 88%, made up mainly of refined oil products including petroleum, liquefied natural gas (LNG), and natural gas liquids (Central Bank of Trinidad and Tobago, 2009).
Trinidad and Tobago is the main exporter of oil in the Caribbean region and the main producer of liquefied natural gas in Latin America and the Caribbean. The role of the country‟s energy sector is, therefore, not limited to serving as the engine of growth for the national economy but also includes providing energy security for the small island developing States of the Caribbean. However, with its hydrocarbon-based economy, Trinidad and Tobago is ranked seventh in the world in terms of carbon dioxide (CO2) emissions per capita, producing an estimated 40 million tonnes of CO2 annually. Almost 90% of these CO2 emissions are attributed directly to the energy sector through petrochemical production (56%), power generation (30%) and flaring (3%).
Trinidad and Tobago is a ratified signatory to the United Nations Framework Convention on Climate Change and the Kyoto Protocol. Although, as a non-Annex 1 country, Trinidad and Tobago is not required to cut its greenhouse gas emissions under the Protocol, it is currently finalizing a climate change policy document as well as a national energy policy with specific strategies to address climate change.
The present study complements the climate change policy document by providing an economic analysis of the impact that climate change could have on the energy sector in Trinidad and Tobago under the Intergovernmental Panel on Climate Change alternative climate scenarios (A2 and B2) as compared to a baseline situation of no climate change.
Results of analyses indicate that, in the short-run, climate change, represented by change in temperature, is not a significant determinant of domestic consumption of energy, electricity in particular, in Trinidad and Tobago. With energy prices subsidized domestically and fixed for years at a time, energy price does not play a role in determining electricity demand. Economic growth, as indicated by Gross Domestic Product (GDP), is the single major determinant of electricity consumption in the short-run. In the long-run, temperature, GDP, and patterns of electricity use, jointly determine electricity consumption.
Variations in average annual temperature due to climate change for the A2 scenario are expected to lead to an increase in electricity consumption per capita, equivalent to an annual increase of 1.07% over the 2011 baseline value of electricity consumption per capita. Under the B2 scenario, the average annual increase in electricity consumption per capita over the 2011 baseline value is expected to be 1.01%. The estimated economic impact of climate change on electricity consumption for the period 2011-2050 is valued at US$ 142.88 million under the A2 scenario and US$ 134.83million under the B2 scenario. These economic impact estimates are equivalent to a loss of 0.737% of 2009 GDP under the A2 climate scenario and a loss of 0.695% of 2009 GDP under the B2 scenario.
On the energy supply side, sea level rise and storm surges present significant risks to oil installations and infrastructure at the Petroleum Company of Trinidad and Tobago (PETROTRIN) Pointe-a-Pierre facilities (Singh and El Fouladi, 2006). However, data limitations do not permit the conduct of an economic analysis of the impact of projected sea level rise on oil and gas production.