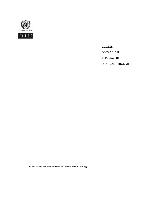 Changing precipitation patterns and temperature relate directly to water resources and water security. This report presents the findings of an assessment of the water sector in Grenada with respect to the projected impact of climate change.
Grenada‘s water resources comprise primarily surface water, with an estimated groundwater potential to satisfy about 10%-15% of the present potable requirement. On the smaller islands Carriacou and Petite Martinique, domestic water is derived exclusively from rainwater catchments. Rainfall seasonality is marked and the available surface water during the dry season declines dramatically. Changing land use patterns, increase in population, expansion in tourism and future implementation of proposed irrigation schemes are projected to increase future water requirements.
Economic modeling approaches were implemented to estimate sectoral demand and supply between 2011 and 2050. Residential, tourism and domestic demand were analysed for the A2, B2 and BAU scenarios as illustrated. The results suggest that water supply will exceed forecasted water demand under B2 and BAU during all four decades. However under the A2 scenario, water demand will exceed water supply by the year 2025.
It is important to note that the model has been constrained by the omission of several key parameters, and time series for climate indicators, data for which are unavailable. Some of these include time series for discharge data, rainfall-runoff data, groundwater recharge rates, and evapotranspiration. Further, the findings which seem to indicate adequacy of water are also masked by seasonality in a given year, variation from year to year, and spatial variation within the nation state. It is imperative that some emphasis be placed on data generation in order to better project for the management of Grenada‘s water security. This analysis indicates the need for additional water catchment, storage and distribution infrastructure, as well as institutional strengthening, in order to meet the future needs of the Grenadian population.
Strategic priorities should be adopted to increase water production, increase efficiency, strengthen the institutional framework, and decrease wastage. Grenada has embarked on several initiatives that can be considered strategies toward adaptation to the variabilities associated with climate change. The Government should ensure that these programs be carried out to the optimal levels for reasons described above. The ―no-regrets approach‖ which intimates that measures will be beneficial with or without climate change should be adopted.
A study on the Costs of Inaction for the Caribbean in the face of climate change listed Grenada among the countries which would experience significant impacts on GDP between now and 2100 without adaptation interventions. Investment in the water sector is germane to building Grenada‘s capacity to cope with the multivariate impact of changes in the parameters of climate.