The strategies of multinational companies in 1990s Argentina 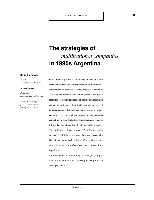 The strategies of multinational companies in 1990s Argentina

In the 1990s,Argentina received large amounts of foreign direct investment and the participation of multinational companies in the country's economy increased significantly. As during the import substitution industrialization period, the basic goal of multinationals is still to exploit the domestic market.Two differences from that period can be observed, however:access to the Brazilian market allows for greater economies of scale and specialization,and increased competition in many tradable sectors is forcing subsidiaries to bring their operations closer to international best practice. These differences,though,are not reflected in the trading practices of subsidiaries.Although these have considerably higher import ratios than local firms,differences in the export ratios of the two types of companies are not statistically significant. Multinationals' manufacturing exports go mainly to Mercosur,while their imports come principally from the developed countries.