Changes in the industrial development of Latin America 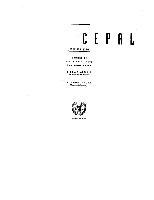 Changes in the industrial development of Latin America

Trade liberalization, deregulation of economic activity, the privatization of public-sector production units and much more careful management of the main macroeconomic aggregates are causing profound changes in the behaviour of the Latin American economies. A more competitive climate is gradually spreading through the countries of the region as companies, markets and institutions adapt to a new micro- and macroeconomic scene. This article analyses the various types of modifications in the production structure of the industrial firms of Latin America, the variations in productivity, the systems of incentives and industrial organization, as well as the organization of labour and the trends of the changes connected with the factors of production. Among other conclusions, it is noted that the weight of industry in the GDP is steadily going down, especially since the 1980s, in the context of a reorientation of the region's production structure towards natural resources and services. It is also noted that during the last quarter-century there has been a process of convergence between the region's productivity and that of the United States in the industrial commodities sectors, especially in the transport equipment sector but also, albeit to a lesser degree, in the metal products and machinery sector; in contrast, the productivity gap has widened in the most traditional sectors (textiles, clothing, footwear, etc.);, while in the foodstuffs, beverages and tobacco sector it has remained unchanged.