Inicio » Publicaciones » Appraisal and conclusions from the 1994-2009 review of the implementation of the Cairo Programme of Action in the Caribbean
Disponible en:English 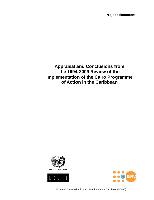 The countries of English- and Dutch-speaking Caribbean have made significant progress in its economic and human development. Most governments have implemented programs and policies of social protection for vulnerable groups of the population, but its sustainability could be jeopardized because of the global financial crisis. In this cyclical factor is compounded by large external debts of these countries, high exposure to natural disasters, limited natural resources, limited economic diversification and some challenges to their institutional capacities. Although short-term policies are needed to address the current economic crisis, governments should avoid reducing social spending and not lose sight of the long-term perspective which should guide the development plans. In this context it is important to maintain and strengthen the political commitments made to the objectives of the Programme of Action of the International Conference on Population and Development (ICPD-PA), signed in 1994, and to provide the necessary financial support to pursue implementation.This, broadly speaking, is the scenario described and analyzed in the evaluation of the implementation of the ICPD-PA in the Caribbean region 15 years after its approval, whose two main results are represented in this document. The first is the subregional report, the basis of the evaluation of the implementation of the Program of Action adopted in Cairo, which is presented as the first chapter of this document. The second are the conclusions arising from the "Caribbean Subregional Meeting to Assess the Implementation of the Programme of Action of the ICPD 15 years after its adoption", which took place in Antigua and Barbuda from 20 to 21 August 2009. These conclusions comprise the second component of the document, both in its original English version (second chapter) and in Spanish (third chapter).