Inicio » Publicaciones » New contributions to the analysis of poverty: methodological and conceptual challenges to understanding poverty from a gender perspective
Disponible en:English

New contributions to the analysis of poverty: methodological and conceptual challenges to understanding poverty from a gender perspective 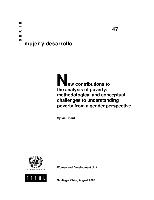 The overall aim of this paper is to outline the major methodological and conceptual challenges to understanding poverty from a gender perspective. The paper is divided into three main sections. Section one reviews the ways in which the frontiers of poverty analysis have been pushed forward and progressively 'engendered' during three decades of dedicated feminist research and activism in Latin America and other parts of the South. This includes discussion of past deficiencies and cumulative improvements in data on Women's poverty, of the ways in which burgeoning research on gender has contributed to evolving conceptual approaches to poverty, and of key factors signalled as leading to gender-differentiated burdens of poverty. In section two, the discussion turns to outstanding barriers to understanding poverty from a gender perspective. The principal challenges identified include varying forms of gender exclusion in mainstream analytical and methodological approaches, continued inadequacies in data on gender and poverty, and the ways in which advocacy for directing resources to women has given rise to certain stereotypes which narrow the optic through which poverty is conceptualised and addressed. The third and final section offers thoughts on future directions in research and policy. How might gender and poverty investigation move forward in the 21st century so as to sharpen our instruments for measurement, and to better inform and influence policy interventions? In turn, to which areas might policy be most usefully directed? While Latin America is the main focus of analysis throughout the paper, given the global reach of discourses on gender and poverty, insights are also drawn from academic and policy discussions outside the region.