Development of technological capabilities in an extremely volatile economy. The industrial sector in Argentina 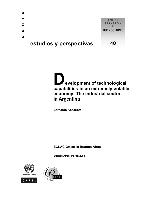 Development of technological capabilities in an extremely volatile economy. The industrial sector in Argentina

The goal of this paper is to analyse the main characteristics of Argentine manufacturing industry and the development phases (going back more than a century);, especially, to concentrate on its structural features during the 1980s and on the changes that have occurred since the Convertibility Plan was introduced - between 1991 and 2001 -, the most recent transformations between 2002 and 2006 and, finally, in the last section we analyze the possibilities of strengthening the development of competitiveness and the ways to industrial development.Argentina's industrialization started off in the late 19th century and developed alongside the dynamic agro-export model which dominated the economy until the beginning of the 1930s. At that time, industry began to occupy a favoured position in the Argentine economy through the process known as import substituting industrialization (ISI);. In fact during the second phase of ISI, which began in 1958, industrial activities became the country's engine of economic growth and job creation, and its base for capital accumulation. At the same time, industry was developing technological capabilities which were remarkable for the Latin American context at that time. However, by the mid-1970s, this model of industrialization was facing a series of inherent difficulties. A structural reform programme linked to the opening-up of the economy was implemented; but the failure of this policy (in its detailed application); in the period 1976-81 ended up by dislocating the production structure. In the 1980s and 1990's, another organizational model for the production of industrial goods emerged in Argentina which was very different from the substitution strategy. It was coupled to changes at the technological frontier and to the instability and uncertainty of the macroeconomic setting, and it gave rise to very substantial modifications at several levels: institutional, sectoral and microeconomic, and also in terms of the way in which Argentine industry was linked into the global economy. After the convertibility collapse, the manufacturing sector 's recovery is based on an effort to become, once again, a pillar of the economic and social development.