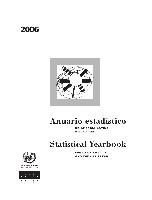 The 2006 edition of the Statistical Yearbook for Latin
America and the Caribbean maintains the modifi cations
in content and design that were introduced in 2005. The
objective was to refl ect the changes in the demands of
researchers who analyse the economic and social situation
of the region and to incorporate the technological advances
that modify the modes of dissemination and use of statistical
information.
This year’s issue of the Yearbook is made up of four
chapters. The fi rst covers demographic and social indicators,
which attest to the special effort made to incorporate the
gender dimension in statistical information. The second
chapter presents basic economic, trade and balance-ofpayments
statistics as well as national accounts. Refl ecting
the growing concern of the regional and international
community for sustainable development, the third chapter
provides available information on the environment and
natural resources.
Given the abundance of different and, at times,
contradictory data now accessible to researchers through
the Internet, special attention must be paid to the technical
specifi cations relating to the source of the data as well as
their defi nition and coverage. This information is presented
in the fourth chapter, which deals with methodology and
metadata.