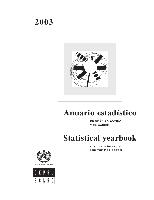 The 2003 edition of the Statistical Yearbook for Latin
America and the Caribbean contains a selection,
updated to the end of December, of the main statistical
series available on economic and social trends in the
countries of the region. It represents a systematic effort
of the ECLAC Statistics and Projections Division to
harmonize the figures and make them internationally
comparable. Part One consists of derived social and economic
indicators (growth rates, ratios or coefficients) which
provide an overview of each area of interest, along with
the background material needed to make the
information suitable for use in specialized analyses.
This group of indicators include those used in the
periodic regional appraisals of the development process
of Latin America and the Caribbean conducted by the
ECLAC secretariat.
Part Two provides historical series in absolute
figures which can be used for a large variety of purposes.
The majority of the statistical tables provide figures on
a single topic, organized in such a way as to facilitate
comparisons among countries as well as between
individual countries and regional totals or averages. The
tables on the balance of payments and national accountsare the only exceptions in this respect, since they have
been prepared on a country-by-country basis. In most of the tables, the countries appear in
alphabetical order; those for which there are no data or
for which the amounts are zero or negligible are not
included.
In Part One of the Yearbook, most of the indicators
correspond to the years 1980, 1985 and 1990, and to
the period 1994-2000. In cases where the data have
not been updated, the most recent figures available for
each country are given. Some of the indicators that
are based on census data are given only for the years
when censuses were conducted. The country and
regional series included in Part Two cover 1980, 1985,
1990 and 1995-2000.