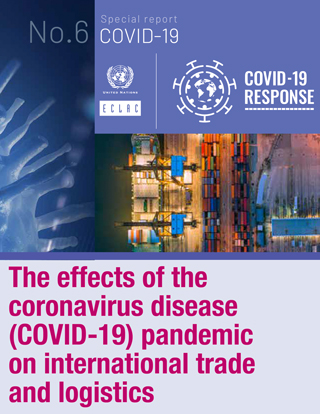 This Special Report is the sixth in a series by the Economic Commission for Latin America and the Caribbean (ECLAC) on the evolution and impacts of the COVID-19 pandemic in Latin America and the Caribbean. It includes estimates regarding the pandemic’s impact on exports, imports, transportation and logistics in the region’s countries.
The COVID-19 outbreak occurred in a context of sluggish global trade that has been dragging on since the 2008–2009 financial crisis. The rapid spread of COVID-19 and the measures taken by governments to contain it have had serious consequences for the world’s major economies. Many productive activities have been disrupted, first in Asia and then in Europe, North America and the rest of the world, and there have been widespread border closures. This has resulted in a steep rise in unemployment, especially in the United States, with a consequent reduction in demand for goods and services. Against this backdrop, global GDP in 2020 is expected to register its sharpest contraction since the Second World War.
In this situation, the volume of global trade in goods fell by 17.7% in May 2020 compared with the same month in 2019 The drop in the first five months of the year was widespread, although it particularly affected exports from the United States, Japan, and the European Union. The economic contraction in China was smaller than the global average, as that country controlled the outbreak and reopened its economy relatively quickly. Latin America and the Caribbean is the most affected developing region.
In a global context of increased production regionalization, regional integration must play a key role in the crisis-recovery strategies in Latin America and the Caribbean. To move forward with regional integration, infrastructure and logistics must be included in economic recovery packages. In addition to their sizeable direct contributions to GDP and employment, infrastructure and logistics are essential for the production of all goods and services, the supply of food and essential services, and international trade competitiveness.

A. Global trade has collapsed .-- B. The region’s trade in goods plummeted 17% between January and May 2020 .-- C. The collapse in tourism is dragging down services exports .-- D. International transport problems hamper regional trade .-- E. Exports and imports of goods set to decline by a quarter in 2020 .-- F. A more uncertain and regionalized world economy makes further regional integration imperative.