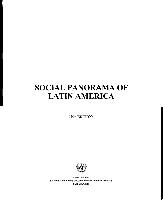 The Social Panorama of Latin America provides a yearly appraisal of the most notable aspects of social trends in Latin America with regard to employment, income distribution, poverty, the status of children and young people, gender and social expenditure. The publication also follows up on the governments'social agenda and examines the direction taken by social policy in the areas of education, health, housing, public safety and government spending. In view of the importance attributed by the region's Governments to the subject of poverty and the fact that 1996 was the International Year for the Eradication of Poverty, this edition of the Panorama devotes special attention to that issue. Its findings attest to the persistence of poverty in Latin America, where, despite a slight reduction in the percentage of poor households between 1990 and 1994 (from 41% to 39%), the population living in poverty today numbers over 200 million persons. Unemployment and the instability and low productivity of new jobs are factors that are closely related to the phenomenon of poverty. Information is also provided on the persistent intractability of income distribution in the region in the face of efforts to improve it. As regards opportunities for gaining access to sources of well-being, children in rural areas continue to lag behind those in urban areas, even though the number of minors at risk of malnutrition has been nearly halved.