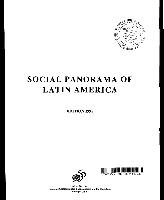 In the 1995 edition of the Social Panorama of Latin America, the Secretariat of the Economic Commission for Latin America and the Caribbean presents its annual assessment of social development. The report consists of four chapters and the a statistical appendix of 46 tables based on social and socio-economic indicators. The first chapter analyses the links between current economic change and social change. An examination of economic growth, inflation and reductions in unemployment brings into focus the relationship between the dynamics of the economy and their social effects in the context of the new forms of development within the region. Some of the countries which reduced their poverty levels in the early 1990s archieved further successes, while others suffered setbacks. The Second chapter, which relates to the education and work of children, adolescents and young people, presents quantitative evidence on the high returns brought by investment in more and better education -not only for young people themselves but also for their households, society and the economy as a whole. There is also a description of the negative impact of child labour on children, adolescents and the families they may form in the future, owing to the large educational deficit incurred by young people who work, and to the consequent loss of earnings during their adult working life.