Quality of life: a compendium of social statistics of five Caribbean countries (1995-2001) 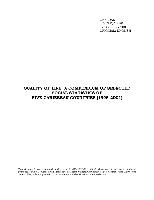 Abstract Quality of Life: A compendium of selected social statistics of five Caribbean countries (1995-2001), is the second in a series on social statistics to be published by the Economic Commission for Latin America and the Caribbean/Caribbean Development and Cooperation Committee (ECLAC/CDCC) secretariat. The first was published in December 1995, entitled Selected demographic and social statistics, 1960- 1994, and was based on the population census data. This compendium of selected social statistics of five Caribbean countries is the first output of the fully searchable subregional social statistical databases, established at the secretariat and is drawn from the national data sets of the Survey of Living Conditions (SLC). The SLC for the selected countries was not completed in any one year but was undertaken by different countries between 1995 and 2000 with the assistance of the Caribbean Development Bank (CDB) and executed by Kairi Consultants Ltd. The main purpose of the compendium is to demonstrate that even with the limited data sets which exist in the subregion, a significant amount of information can be gleaned about the quality of life of persons. The compendium is presented in two sections, one for tables and the other for brief descriptions and social policy guidelines. The tables are presented to highlight differentials either among population groups by age, sex or quintiles and among countries. The second section uses graphs to illustrate the data on population structure, fertility patterns, education, health status and households. It is possible to gather from the data that poverty acts as a serious constraint to persons, particularly the elderly, children and those in female-headed households, in achieving their fullest potential. Specifically, the data points to characteristics, such as, the higher proportion of deaths of children before one and under one to the poorest women than the wealthiest; the low levels of health insurance among the population overall; and the higher dependency rates among the poor than the wealthy. Significantly, it points to the high proportions of people from both the wealthiest and poorest quintiles, in some countries, which have passed no exams and the differential access rate to university education between the poorest and the wealthiest and between women and men