Economic Survey of Latin America and the Caribbean 2009-2010: The distributive impact of public policies 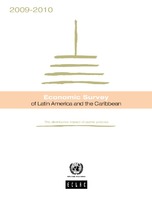 Economic Survey of Latin America and the Caribbean 2009-2010: The distributive impact of public policies

In 2009, the economies of Latin America and the Caribbean suffered the onslaught of the global financial crisis and, as a result, the region's GDP shrank by 1.9%. In the second half of the year, however, most of the region's countries were experiencing a robust recovery that has been consolidated in 2010, paving the way for regional GDP to expand by 5.2%. This makes Latin America and the Caribbean, together with the emerging economies of Asia, one of the most dynamic regions in the world. Both internal and external factors are underpinning this positive performance. The most notable external factors include the continued buoyancy of certain key Asian economies, whose sustained demand for the region's products has led to a significant recovery of both the prices and volumes of exports, especially commodities such as metals and minerals, petroleum and certain grains in the case of South America. The —albeit sluggish— recovery of the United States economy, meanwhile, has improved the situation for Mexico and Central America and, inasmuch as it has boosted tourism demand, possibly for the Caribbean as well. For the same reasons, remittances sent by migrant Latin American and Caribbean workers from the United States are also expected to pick up slightly. The growth figures for Europe, however, though positive, will be far lower, and the fiscal consolidation efforts now under way will keep them that way. The internal factors include the fiscal and monetary policy space that several of the region's countries had built up during the six previous years of booming commodity prices and sustained growth, which enabled them to deploy countercyclical measures during the crisis. Countries had also steadily reduced their external debt burdens, posted steady improvements in their fiscal accounts and increased their international reserves, which meant that at all times, except at the very peak of the crisis, they had access to resources on the international capital markets. The implementation of programmes to stimulate domestic demand against a backdrop of receding uncertainty, the return to relative normality on the financial markets and greater access to credit, combined with the gathering upturn in the international economy, created the conditions for economic activity to recover gradually over the course of the year, as reflected in the rises recorded in private consumption and investment and, to a lesser extent, in exports. There are, however, certain and, in some instances, quite notable exceptions within this generally positive picture. A number of Central American and Caribbean countries, as net importers of food, fuel, metal and minerals, suffered rather than benefited from the upturn in commodity prices. For the same reason, they were unable to improve substantially their fiscal standing or their external debt position (although those covered by the Highly Indebted Poor Countries (HIPC) debt reduction initiative recorded improvements in the latter). This has made these countries highly vulnerable to fluctuations in the global economy. The favourable situation in which the region now finds itself, however, rests in part on transitory factors that are unlikely to recur in 2011, and this needs to be taken into account. The region was able to respond dynamically to external demand and the countercyclical stimuli by taking advantage of pre-existing idle capacity, but that possibility could be exhausted during the present recovery. At the same time, governments are facing a waning capacity to keep the current countercyclical measures in place and to introduce new stimuli without sacrificing the achievements of several years of effort in terms of maintaining macroeconomic equilibriums. In light of these considerations, growth estimates for 2011 are 3.8% for the region as a whole. In short, once the recovery is well established, the main challenges involved in the pursuit of steady growth will return: how to create the conditions needed to increase public and private investment and productivity; in other words, the conditions for greater growth in the future. Simultaneously, the region must continue boosting public finances to expand and improve social programmes, particularly those with a redistributive impact, so as to be able to achieve growth with greater equity. In this regard, the second part of this edition of the Economic Survey discusses the contribution that public policies can make to strengthening the link between economic growth and distributive equity, a link that has proven elusive in the economic history of Latin America and the Caribbean. Four chapters are thus devoted to the analysis of the distributive impact of macroeconomic volatility, its repercussions in labour markets and the policies that can be deployed to tackle it, as well as to the ways in which tax policy and social spending can help protect the most vulnerable sectors of the population within a broader strategy aimed at attaining a more inclusive form of development in the region.