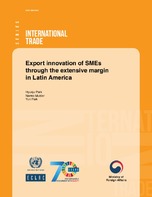 In Latin America and the Caribbean, there is little direct evidence on export innovation of small and medium-sized enterprises in (SMEs). This type of innovation refers to the adaptation of products and business processes to technical standards, tastes and other customer requirements in the target markets. The successful fulfillment of these requirements by a firm can be measured indirectly through the sale of a new product to an existing market, the entry of an existing product to a new destination, or both. These movements can be measured using firm-level customs data, as is done in this study for Chile, Colombia, Costa Rica, and Mexico for the period 2000 to 2015.

The results confirm the well-known fact that a high share of SMEs enter and leave the universe of exporting firms each year. Among the four countries, exporting SMEs in Costa Rica had the lowest entry and exit rates and the highest survival rates. On average, SMEs in Costa Rica and Mexico incorporated more new products into their export basket than those in Chile and Colombia. This is because SMEs in the latter two countries exported mostly natural resources concentrated in few products, while SMEs in the former two countries were selling a relatively more diversified basket of manufactures. Within the sample, Costa Rica was the country where exporting SMEs added more destinations to their export basket each year. In contrast, Mexico was the one where SMEs added the smallest number of new destinations (less than one) on average, due to their great dependence on the United States as an export market.