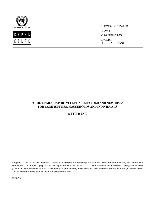 Vulnerability is an emerging issue that has been raised repeatedly in sociological analyses at the dawn of the twenty-first century and in debates on public policies aimed at alleviating poverty, promoting upward social mobility and empowering citizens. If this issue has been so topical, it is because a variety of factors, some highly controversial and others difficult to measure accurately, have contributed to the phenomenon. They include: the increasingly unstable macroeconomic context; the frequency with which households lapse into and emerge from poverty, a trend seen even among traditionally secure groups; various signs of fragmentation and social asymmetries; defencelessness against different types of risk, some of which have been growing; and new forms of segmentation of access to important assets in terms of social mobility. Conscious of this situation, national delegations attending the meeting of the ECLAC sessional Ad Hoc Committee on Population and Development held during the twenty-ninth session of the Commission (Mexico, D.F., April 2000) requested the Population Division of ECLAC-Latin American and Caribbean Demographic Centre (CELADE) to prepare a document on social vulnerability. In response to this mandate, which was embodied in resolution 577(XXVIII) of the Commission, a summary version1 of the document, Socio-demographic vulnerability: old and new risks for communities, households and individuals",2 was prepared thanks to the valuable support of other ECLAC divisions and the technical and financial cooperation provided by the United Nations Population Fund (UNFPA), and was presented and considered at the following ECLAC session (Brasilia, May 2002). The text now being presented in electronic format consists of two chapters of the document. The first reviews the literature on the subject and describes in detail the approach and notion of vulnerability, which are considered relevant for the analysis of relationships between population and development at the level of households, communities and individuals. The second presents the conclusions formulated with a view to proposing policy options for addressing the problem of socio-demographic vulnerability and for obtaining a deeper insight into the relationship between population and development. This material is being published electronically in response to an explicit request from countries represented on the ECLAC sessional Ad Hoc Committee on Population and Development and to a need identified in recent months, when technical assistance on socio-demographic vulnerability was being provided to countries in the region. The issue has aroused tremendous interest and high expectations, but is also the subject of doubts and skepticism. Hence, both the first chapter, which examines and elucidates the conceptual approach and the conclusions seek to give a clear picture of the scope, potential and limitations of the study of socio-demographic vulnerability in the region. The application of a notion of vulnerability that incorporates in a logical chain socio-demographic risks and the ability to respond and adapt is extremely useful, especially for considering emerging issues relating to population and development from the point of view of the individual, the household and the community and for the adoption of appropriate measures in this regard. This does not mean that the notion of socio-demographic vulnerability is cut and dried or can be interpreted in a single way or that the approach used in this case is superior to earlier approaches. This study is, rather, a contribution to the difficult and invariably complex task of understanding and predicting the demographic dynamic and of acting intelligently in this respect in order to promote recognition of individual rights, improve living conditions of households and further the economic and social development of communities."