The determinants of recent foreign bank penetration in Brazil 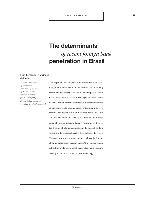 The determinants of recent foreign bank penetration in Brazil

This paper sets out to analyse the determinants of recent foreign bank investments in the Brazilian retail banking market and the strategies of the major European banks in Brazil. Since the recent wave of banking internationalization, financial institutions have continued to pursue their existing relationships while seeking greater integration into local markets. The recent influx of European banks into Latin America and Brazil, meanwhile, has been due to a varied range of factors, including bank restructuring in Europe, the dynamic of internationalization in the Spanish banking system and the process of market deregulation in the region. The paper also stresses some common and specific features of the major European banks in Brazil. One common feature is that they are large universal banks which have chosen to develop abroad as a business expansion strategy.