Accountability in government programmes to promote small and medium-sized enterprises 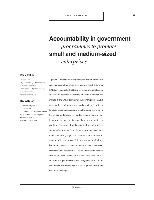 Accountability in government programmes to promote small and medium-sized enterprises

A potential threat to the effectiveness of institutions in Latin America promoting small and medium-sized enterprise (SME); development is that these programmes might become clientelistic agencies, advancing interests other than the welfare of the SMEs themselves. As governments in Latin America have adopted more market-oriented policies, however, government institutions in the region that promote SMEs are undergoing a similar transformation. Our hypothesis is that two factors, the extent to which an institution has adopted market-oriented practices and its degree of autonomy (both from government and from societal interest groups);, are what determine its level of accountability, as measured by the extent to which the institution conducts systematic, independent evaluations of the impact of its programmes. The four cases examined here (SEBRAE in Brazil, NAFIN in Mexico, CORFO in Chile and SEPYME in Argentina); show that the hypothesis is valid for government institutions, but less so for private institutions with assured budgets.