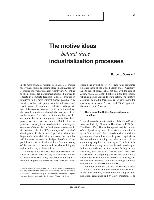 In its most orthodox version, neoclassical economic theory has occupied a leading place in Latin American economic policy discussions in recent years. According to this doctrine, the market mechanisms -if allowed to operate in complete freedom- allocate production resources in the most efficient manner possible. Any interference by State policy with this allocation will lead to loss of efficiency and a reduction in the growth rate of the economy compared with the optimum level that could be obtained through the free play of the market forces. The virtues of the main body of this economic theory for interpreting reality have been proved over more than two centuries. But this does not justify overlooking the serious limitations affecting the operation of the market or the differences observed in that operation in the different stages of countries' development. In the historical period in which they began their industrialization processes, the countries which are now developed applied policies of active State participation in combination with the free functioning of the market, and formulated theories which gave technical backing to those policies. Although these facts have been studied and are well known in academic circles, very little reference is made to them in economic policy discussion in our region. I therefore propose in this essay to recall the ideas which guided the evolution of two important economic policies: those of the United States and of Germany. Due to lack of space, I shall not deal with the case of Japan, which also applied policies in the last century which combined State and private action. The first two cases will be used in this essay as the background for analysing the ideas of Prebisch and ECLAC applied to the case of Latin America.