Job-seeking strategies in Trinidad and Tobago 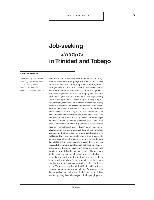 Job-seeking strategies in Trinidad and Tobago

National levels of unemployment in Trinidad and Tobago have remained consistently high since the 1980s, because of the economic recession, subsequent structural adjustment arrangements and the diminution of traditional labour-intensive activities such as estate agriculture. Groups which had been dependent upon casual employment that was available in pre-recession times have been experiencing chronic unemployment. Combining extremely irregular casual employment with activity in the informal sector, they occupy a marginal and precarious position in the labour market. This study examines the way in which the characteristics and strategies of job-seekers differ in mainstream and in peripheral areas of the labour market. In analysis of the qualitative data, based on 45 in-depth interviews, Ragin's qualitative comparative procedures were used. This method of analysing qualitative data permitted scrutiny of different individuals' combinations of characteristics, and identification of those job search strategy components that led either to finding employment or to suffering long-term unemployment. The chronically unemployed showed a consistent lack of up-to-date knowledge of the labour market, whereas those who were successful in finding employment did have this type of information, through 'weak ties' based on family and previously established labour market links. The success in finding employment by individuals who lacked advanced secondary schooling and vocational training could be associated with their 'ties of merit' acquired from employment experience and a work record in the formal sector. The data suggest that while affiliation with the formal economy could strengthen an individual's position in the labour market, association with the informal sector did not seem to give any later advantages in finding employment.