The Mexican maquila industry and the environment: an overview of the issues 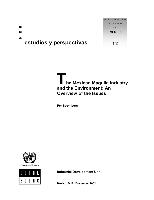 The Mexican maquila industry and the environment: an overview of the issues

The Mexico-United States border region comprises one of the most dynamic and complex industrial areas in the world. The region is characterized by high population growth and increasing urbanization and industrialization, all of which is taking place in a context of rapid political and economic change (Rincón, 2000). The Mexico-located maquila in-bond industry is a key player in this development. In the 1993-98 period, the maquilas accounted for 41.5% of the average Mexican export value (Dussel, 2000), and in the 1994-2000 period its share of foreign direct investment grew from 6% to 21.4%. However, while industrial development is desirable as a generator of material wealth (e.g. provision of employment and tax base), it also causes negative effects such as depletion of natural capital (e.g. consumption of environmental goods like water, and services such as the assimilation of emissions). In particular, the location choice and the rapid growth of the maquila industry constitute true challenges for the policy maker. This is accentuated by the fragility imposed by climatic conditions in the Border States and topographical disadvantages as illustrated by the Tijuana region that is vulnerable to erosion, floods and landslides (Ojeda, 2000). Furthermore, this choice of location emphasizes the transborder interdependence in the form of, for example, the many drainage basins which links Mexico and the United States (Johnstone, 1995). The aggregate environmental impact takes the form of augmented demand for space, water, and energy, increased traffic and congestion, hazardous waste generation and subsequent demand for waste management and disposal, atmospheric pollution, and risks for environmental accidents (EPA, 2000). Especially hazardous waste is perceived as one of Mexico's most alarming industry-environmental themes and PROFEPA (2000)states that this is especially true for maquilas. Apart from strong industry growth and the choice of location, the maquilas are distinguished by their production-processes, namely; a) a bias towards labor-intensive (and consequently relatively less sophisticated) processes, 2 b) location in the production-chain, (i.e. spatial, and sometimes ownership-specific separation from the parent company), and c) less extensive production chains. The purpose of this report is to explore the environmental performance of the maquiladoras in this vulnerable setting, taking into account the specific characteristics of this industry. The study will add to existing research in two ways. Firstly, it aims at bridging the gap between previous studies, by isolating and analyzing the key components that determine the maquila's environmental performance, and subsequently put them in their corresponding context. Specifically, it studies the maquiladora's environmental performance in terms of environmental production-related externalities (e.g. atmospheric emissions) as well as regional indirect social-economic externalities (e.g. demographic effects on water consumption). Furthermore, the framework is applied specifically to Mexico, and the United States comparisons are included only to the extent that they are perceived as essential in the Mexican context.3 Secondly, aiming at gathering scattered information so as to provide a broad picture of the variables at hand approaches the challenge posed by the scarcity of data. Previous attempts in the literature to cast light on the environmental performance of the maquiladoras reveals the serious shortage of quantitative as well as qualitative data in the field. Chapter 2 provides definitions, limitations and sources applied in the study. Specifically, a classification of environmental indicators is introduced. Chapter 3 combines the findings of a literature survey with economic theory in order to introduce an analytical framework, which aims to specify the key drivers to the maquiladora industry's environmental performance. The empirically oriented chapter 4 presents indicators that aim to illustrate the drivers to environmental performance. Finally, chapter 5 presents some preliminary conclusions and policy implications.