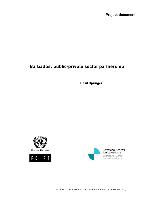 Many successful countries, especially latecomers, in terms of export diversification and enhancement have not relied entirely on spontaneous market forces. Rather they have developed public-private alliances to build consensus about long term strategies. They have proactively established specialized public institutions to support the innovative, entrepreneurial and investment activities that are needed to stimulate national export sectors. This ECLAC project is designed to tell the story of the relative success of Barbados as an example of a country that has employed public-private alliances. Other country cases which are also being studied by ECLAC include Ireland, Finland, Sweden, Australia, New Zealand, Spain, Malaysia and Singapore. Barbados will be the only country case in the English-speaking Caribbean. Barbados has successfully evolved over the past sixty years from a colony, through adult suffrage, in ernal self government to independence in 1966. Its economy has undergone radical transformation from being based on commodity exports such as sugar and rum to becoming a highvalue services exporter. GDP per capita was less than 200 US dollars in the 1950s and is currently just under US$ 10,0001. The country has the third highest rank of the Western Hemisphere on the Human Development Index, after the United States and Canada. This success has been due to a sound post-emancipation educational system, a stable political system, an effective trade union movement, positive benefits from the colonial administration, a dynamic private sector and an effective NGO movement. A solid foundation has therefore emerged on which to build a sustainable future. Much has been written about the Barbados model,2 especially on the aspects of democracy and political participation, education and social development. In the early 1990s, a tripartite Social Partnership (government, trade unions and the private sector) was formally established to deal with the consequences of the economic crisis and to implement the Structural Adjustment Programme with the IMF without need for currency devaluation. The first Protocol agreed upon and focussed on wage and price policy as well as fiscal adjustment but also established the National Productivity Board. In 2005, the tripartite partnership agreed on the fifth in what has become a series of Protocols.3 On May 01 2007, the parties signalled their intention to extend the fifth protocol for another two years. It is widely acknowledged that the success in terms of political and social development is underpinned by a shared vision regarding productivity (human, process and technology) enhancement and service excellence as a means towards increased global competitiveness. It is however not extensively documented exactly how these underpinnings were established and what organisational and institutional mechanisms were created to facilitate public-private dialogue. Some attention has been given by the social partnership as to the composition of the future Barbados economy. It is proposed that Sunrise opportunities replace the "Sunset" industries, e.g. commodity sugar and traditional manufacturing. The Sunrise opportunities have been identified as: (a) Tourism Linkages, to build on the success in the Barbadian Tourism sector, driven primarily by the Export of Indigenous Services (Informatics, Health, Consulting, Education, Entertainment, Transportation, Film and Sports); (b) the West Indian Sea Island Cotton and other Agricultural value added and food industries; (c) the diversified use of the Sugar Cane plant; (d) Agriculture, Food Processing and Food Security; (e) the High-Tech Manufacturing industries; (f) the Renewable Energy industries; and (g) Innovative Financial Services. Invest Barbados, a public sector organisation, has recently been established (January 2007) to develop high performance service exports; to promote Brand Barbados; to seek Foreign Direct Investment and business systems expertise; and to stimulate the creation of a user-friendly enabling environment. This study describes the public-private dialogue in Barbados called the Social Compact, the specific sectors in which innovation is stimulated, the institutional framework which surrounds and supports the tripartite partnership, the resulting performance of the economy and prospects for growth and the extent to which membership of the Caribbean Community can act as a catalyst to progress.""