Forest loss in Latin America and the Caribbean from 1990 to 2020: The statistical evidence 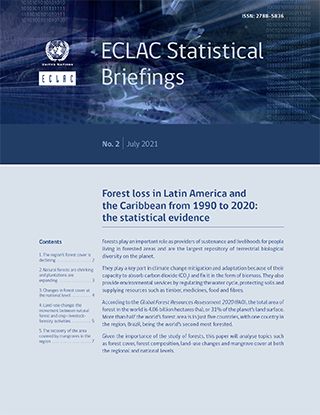 Forest loss in Latin America and the Caribbean from 1990 to 2020: The statistical evidence

Forests play an important role as providers of sustenance and livelihoods for people living in forested areas and are the largest repository of terrestrial biological diversity on the planet. They play a key part in climate change mitigation and adaptation because of their capacity to absorb carbon dioxide (CO2) and fix it in the form of biomass.

According to the Global Forest Resources Assessment 2020 (FAO), the total area of forest in the world is 4.06 billion hectares, or 31% of the planet’s land surface. More than half the world’s forest area is in just five countries, with one country in the region, Brazil, being the world’s second most forested.

Given the importance of the study of forests, this paper analyses topics such as forest cover, forest composition, land-use changes and mangrove cover at both the regional and national levels.