The COVID-19 pandemic could increase child labour in Latin America and the Caribbean. Technical Note N° 1 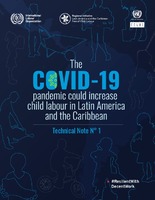 The COVID-19 pandemic could increase child labour in Latin America and the Caribbean. Technical Note N° 1

Currently the world is going through an unprecedented health, social, human and economic crisis due to the pandemic caused by the disease COVID-19. Even though in the current health crisis derived from COVID-19, the frequency of infection and mortality in the child population are lower than in other age groups, children are being affected by the socioeconomic impacts and, in some cases, by mitigation measures that may inadvertently cause more harm than benefit. The pandemic will exacerbate existing vulnerabilities, including an increased risk of child marriage1, child labour, and teenage pregnancy.

According to ILO estimates (2017), the percentage of children and adolescents between 5 and 17 years-old in child labour in Latin America and the Caribbean fell from 10.8% in 2008 to 7.3% in 2016, which is equivalent to a decrease of 3.7 million people in this situation. Despite this good news, there are still around 10.5 million children and adolescents in child labour, and the current situation has the potential to reverse this positive trend, placing the region at risk of not being able to reach Target 8.7 of the Sustainable Development Goals (SDGs), as it relates to “ending child labour in all its forms by 2025”.