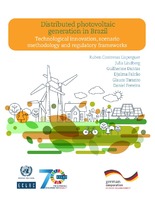 The Brazilian energy sector has reached a preeminent point in its history and has the potential to transform the livelihoods of thousands through innovative and fair energy policies. Since electric power distribution is highly centralized and strictly regulated by the State, it is critical to understand what kind of prospects exist for the diffusion of micro and mini solar photovoltaic generation in Brazil. In this study, a scenario analysis is implemented and the process of constructing the two scenarios, baseline and alternative, is described. Later, a model is presented that estimates diffusion rates based on assumptions established under each of the scenarios. However, scenarios are just one part of the puzzle, and one must recognize the key role to be played by the Brazilian Electricity Regulatlory Agency (ANEEL) and its choices.

Intoduction .-- I. Regulatory challenges for decentralizing electrical systems .-- II. Rethinking the regulation of the distribution sector.