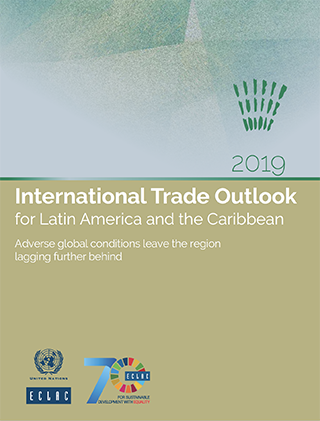 The global trade performance in 2019 was the worst since the international financial crisis. This edition of International Trade Outlook for Latin America and the Caribbean analyses that performance, as well as the mounting trade tensions and their repercussions for the region’s own trade. The heavy slowdown in global trade is the result of the build-up of trade barriers since 2018, as well as longer-standing factors, including weaker global demand, increasing import substitution in some economies, the smaller share of Chinese production going for export, the shrinking of global value chains and the emergence of new technologies that impact the very nature of trade. Chapter II analyses how international trade could contribute more to environmental sustainability. Trade has both positive and negative impacts on the environment and the net balance of that effect is uncertain. The links between trade and the environment have become more visible since the 1990s; the increase in environment-related trade disputes testifies to this, as does the fact that environmental chapters are increasingly being written into trade agreements.
Finally, the third chapter examines the situation regarding infrastructure and logistics, which are key to international trade and production. In conclusion, public policies on economic infrastructure concessions need to be re-examined, considering the crucial role played by the State in regulation, especially in overseeing competition.