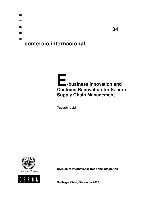 Information technologies (ITs) and supply chain management (SCM) are increasingly considered as indispensable tools of competitiveness especially for companies facing excessive global competition, although these companies have not necessarily succeeded in taking full advantage of such cutting-edge technologies and management systems. Their use, especially of international SCMs, is limited to a small number of purchaser-suppliers groups that are formed primarily by transnational corporations (TNCs). The factors impeding a proliferation of SCMs at a global scale include the difficulties that companies face in establishing flexible electronic data interchange (EDI) systems with their business partners, the high costs involved in building seamless and real-time information sharing systems where long-term business partnerships do not exist, and uncertainty on and high costs involved in international trade such as trade finance and customs procedures. In addition, the terrorist attacks on September 11, 2001 in New York magnified national security concerns, which seem to have a negative effect on global SCMs. On the other hand, new technological innovations in web services and tracking/tracing are emerging from the efforts to overcome these hurdles. This paper examines the late efforts on e-commerce, customs modernization, and trade facilitation, in response to the recent dynamic progress in information and web technologies. In the first chapter, we study some cases of SCMs emphasizing the importance of the state of the art information systems as an important instrument of trade facilitation. The second chapter reviews the recent efforts by the international community for trade facilitation, as well as new technologies and services based on eXtensible Mark-up Language (XML) and radio frequency identification (RFID) that have a great potential to change the online business environment dramatically. The third chapter consists of case studies on renovations of customs and trade information systems in Asia, Europe and North America while the fourth chapter reviews the present situations and efforts in Latin America. Based on these chapters, policy implications will be derived in the last chapter.