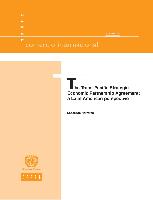 In March 2010, negotiations aimed at enlarging the Trans-Pacific Strategic Economic Partnership Agreement (TPP) were launched. Nine countries from Asia, Oceania and the Americas currently participate in them. The United States, which in practice has assumed a leading role, has stated that this process has the ultimate goal of transforming the TPP in a platform for large-scale trans-Pacific economic integration. It has also expressed that the enlarged TPP should be a high-quality, 21st century agreement. For the current two Latin American participants (Chile and Peru), as well as for other prospective candidates, the TPP offers the possibility of strengthening their trade and investment links with Asia Pacific, the world's most economically dynamic region. The TPP could also make a meaningful contribution to tame the tangle of preferential trade agreements across Asia Pacific. However, given the current set of participants, the negotiations offer both Chile and Peru little in terms of improved market access. Moreover, they are characterized by uncertainty as to their content, architecture and membership, as well as by risks such as having to make new concessions in sensitive areas like intellectual property and investment. Overall, the success prospects of the TPP negotiations depend largely on how the trade policy environment in the United States evolves during 2011.""