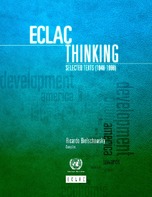 To commemorate the 50th anniversary of the creation of the Economic Commission for Latin America and the Caribbean (ECLAC), in 1998 the anthology Fifty years of ECLAC thought: selected texts, was published in Spanish and Portuguese, as a selection of the Commission’s classic works spanning the period from its inception through to the 1990s. Since then, that volume has become an obligatory reference in studies on Latin American development for readers who are familiar with either of those two languages; and it has been widely used in the region’s university courses, both in economics and in social sciences generally. The book’s excellent reception reflected the fact that it provided a good sample of the intellectual path followed by ECLAC during its first 50 years of existence. Now, in response to great demand from academics and others interested in ECLAC’s work, it gives us great satisfaction to publish a version in English, which will allow it to be more widely disseminated throughout the world.