Home » Publications » Latin America and the Caribbean in the World Economy 2014: Regional integration and value chains in a challenging external environment
Available in: EnglishEspañolPortuguês

Latin America and the Caribbean in the World Economy 2014: Regional integration and value chains in a challenging external environment 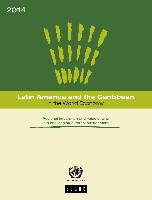 The 2014 edition of Latin America and the Caribbean in the World Economy: Regional integration and value chains amid challenging external conditions has four chapters.
Chapter I examines the main features of the international context and their repercussions for world and regional trade.
Chapter II looks at Latin American and Caribbean participation in global value chains and confirms that the region, with the exception of Mexico and Central America, has only limited linkages with the three major regional value chains of Asia, Europe and North America. This chapter also looks at how participation in value chains may contribute to more inclusive structural change, by analysing three core microeconomic aspects.
Chapter III identifies various spheres in which regional integration and cooperation can help strengthen production integration between the economies of Latin America and the Caribbean.
The fourth chapter explores the intra- and extraregional trade relations of the countries of the Caribbean Community (CARICOM) and considers how to strengthen production integration in the subregion by taking advantage of linkages beyond trade and building on commercial and production complementarities among the members. The chapter also reviews the differences between the countries in terms of income, population and production and export structure, in a context of marked macroeconomic vulnerability.