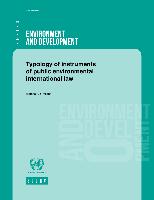 At the second meeting of the focal points appointed by the Governments of the signatory countries of the Declaration on the application of Principle 10 of the Rio Declaration on Environment and Development in Latin America and the Caribbean, which was held in Guadalajara, Mexico, on 16 and 17 April 2013, a decision was made to form working groups to advance towards the creation of a regional instrument. Thus, a working group on access rights and the regional instrument was formed for the purpose of gaining more in-depth knowledge on access rights in order to make a proposal on the nature and scope of the application of a regional instrument. At its first meeting, the working group determined that a study describing the different types of international instruments would be useful in helping it achieve its objective.
This report explores the different types of instruments that are used in public international law, with an emphasis on the instruments that are relevant to Principle 10. The report has three chapters, which are as follows. The first chapter analyses the term “international instrument” and discusses the distinction between binding and non-binding legal instruments, illustrated with examples. The second chapter describes the function of implementation and compliance mechanisms in an international instrument, providing examples of these mechanisms. The third chapter presents the multilateral and regional instruments relevant to access rights regarding information, participation and justice in environmental matters in Latin America and the Caribbean.

Observatory on Principle 10 in Latin America and the Caribbean