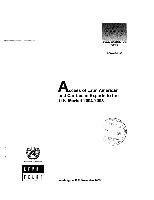 The trade relationship between the United States and Latin America and the Caribbean has grown over the past years to the benefit of both economies. Additionally, important efforts have taken place in pursuit of free trade. The United States Congress approved the Dominican Republic - Central American Free Trade Agreement (DR-CAFTA) in 2005. The agreement shall enter into effect on a date to be agreed upon among the parties, pending approval of Nicaragua and Costa Rica legislatures. Furthermore, the United States is negotiating with Peru, Colombia, and Ecuador to establish the Andean Free Trade Agreement. Bolivia remains committed to eventually joining the accord. The United States and Panama have expressed the desire to resume negotiations for a bilateral free trade agreement. In this context this report is expected to contribute to transparency and the elimination of obstacles to the free flow of trade in the Americas. It provides an overview of barriers and measures inhibiting trade. The classification of trade inhibiting measures follows the definition used in the U.S. Trade Representatives (USTR) yearly publication National Trade Estimate Report on Foreign Trade Barriers. The report at hand focuses on the three areas of greatest relevance for Latin America and the Caribbean: Imports Policies (e.g., tariffs and other import charges, quantitative restrictions, import licensing, customs barriers). Agricultural Supports (e.g. export subsidies, market development programs and export finance programs) The Public Health Security and Bioterrorism Preparedness and Response Act of 2002 (e.g. Title III Safety of food and drug supply and Security Programs)