Barriers to Latin American and Caribbean exports in the US market, 2000-2001 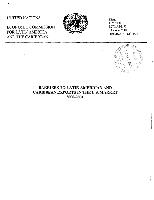 Barriers to Latin American and Caribbean exports in the US market, 2000-2001

Introduction Barriers to Latin American and the Caribbean Exports in the U.S. market, 2000- 2001 is the seventh annual report released by the ECLAC Washington Office, updating information contained in previous reports. Its aim is to compile and make available information on trade inhibiting measures that Latin American and Caribbean exports encounter in the United States. The report needs to be placed in the context of a trade relationship between the United States and Latin America and the Caribbean, which has grown strongly over the years to the benefit of both economies. Moreover, it must be viewed against the background of the commitment to achieve the Free Trade Area of the Americas (FTAA), through which barriers to trade and investment will be progressively eliminated. In this regard, it is hoped that this report will further contribute to transparency and the elimination of obstacles to the free flow of trade in the Americas. The classification of trade inhibiting measures follows the definition used in the U.S. Trade Representative's yearly publication National Trade Estimate Report on Foreign Trade Barriers. Based on this classification, the report focuses on the three areas of greatest relevance for Latin America and the Caribbean: Imports Policies (e.g., tariffs and other import charges, quantitative restrictions, import licensing, customs barriers). Standards, testing, labeling and certification (e.g., unnecessarily restrictive application of phytosanitary standards). Export subsidies (e.g., export financing on preferential terms and agricultural export subsidies that displace other foreign exports in third country markets).