Home » Publications » Analysis of trade flows between Puerto Rico and CARICOM and prospects for integration
Available in: English 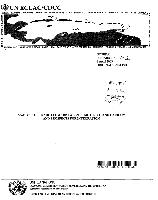 Puerto Rico and Caribbean Community (CARICOM); Caribbean countries share important
common characteristics. They are open economies and while their trade specialization
patterns are heterogenous, historical, institutional and geographical factors have shaped
export and import linkages that are closely tied to those of the United States and Western
Europe.

CARICOM Caribbean economies and Puerto Rico also adopted, early on, a common approach
to development, that of 'industrialisation by invitation'. Its main elements included
fiscal incentives, the attraction of foreign direct investment flows and, in the case of
CARICOM Caribbean economies, an import policy encapsulated in the common external tariff.

Finally both confronted the process of increasing internationalization of trade flows
and investment, a changing external environment and a widening process of economic
liberalization with a positive response. It consisted in deepening and strengthening their
respective regional ties.

CARICOM economies revised the Chaguaramas Treaty and laid the foundations for the
formation of the single market and economy (CSME, 1991);. As part of its overall policy
orientation, Puerto Rico, has sought to deepen its relations with the greater Caribbean
region. A first step in this direction is an analysis of the trade flows with CARICOM
Caribbean economies. This document provides such analysis. It is divided into three
sections.

The first section provides a brief comparison between Puerto Rico and CARICOM Caribbean
economies in terms of size, output, development models and trade specialization patterns.
The second section analyses trade flows between Puerto Rico and CARICOM. This section
provides an aggregate and country-by-country trade analysis with Puerto Rico including
exports and imports. Some of the variables considered include market share, relative unit
values and specialization. The analysis also uses the constant share analysis methodology
to determine the importance of demand (global demand); and that of market dynamics for
given products (structural demand effect);.The analysis is complemented by a typology of
Puerto Rican export products to the Caribbean.

The third section centers on the perspectives for further commercial integration
between CARICOM economies and Puerto Rico. Following a computation of indices of trade
compatibility on a country-by-country basis, the document analyses four aspects that are
fundamental determinants of any integration process. These are the Commonwealth status of
Puerto Rico; the size of the market and the composition of output; the trading regime and
the degree of competitiveness of the economies involved. Competitiveness is ascertained
using selective indicators such as operating costs, transport costs and the real exchange
rate. The final reflections are found in the conclusion.