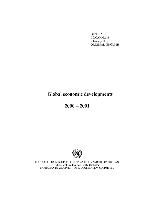 Executive Summary The global economy is experiencing a recession, which originated in the United States and is affecting developed and developing economies alike. Between the second and third quarter of 2001, the United States GDP growth rate decreased from 2.6 per cent to 1.2 per cent. For the same period, the European Union's GDP growth rate declined from 2.4 per cent to 1.7 per cent. For Latin America and the Caribbean the growth will fall from 4 per cent in 2000 to 1 per cent in 2001. A central issue regarding the current recession is whether it will be short lived or rather a protracted one. Identifying the nature of the recession will determine the type of macroeconomic policy to deal with this phenomenon. The type of macroeconomic policy advocated to deal with the current recession is mainly countercyclical. This involves the reduction in tax cuts and interest rates to stimulate spending and investment. Exchange rate movements have been stable and have responded, so far, to leading macroeconomic indicators. For its part, the terms of trade variations are registering the decline in non-oil and oil commodity prices. For the majority of developing economies the decline in non-oil commodity prices adds a further constraint to their potential economic performance. In the same vein, a decline in oil prices for non producer countries provides a respite in the efforts required to maintain the current account balance and, in some cases, a true Â'buffer stock' mechanism for the government budget. The recession is taking place as important institutional arrangements are being negotiated or implemented. The extension of the market access preferences of the Caribbean Basin Initiative (CBI) to garments under the Law of Commerce and Development may serve to develop textile industry and exports to the United States. At the same time the granting of the trade promotion authority to the executive branch of the United States government will erode part of the positive effects of the Law of Commerce and Development. The fourth World Trade Organization (WTO) Ministerial Conference (Doha, Qatar, 9-14 November 2001) addressed several pressing issues for developing economies. Among the most relevant for Caribbean countries are the implementation of special and differential treatment, the small economies issue, the extension of export subsidies for developing economies, and the extension of a waiver to the European Union to maintain a preferential and discriminatory trading regime with African, Caribbean, Pacific (ACP) countries. The impact of the recession on the Caribbean will depend on a number of factors. These include the length and depth of the economic slump in these major markets and other markets; the impact of the slowdown on capital and trade flows, particularly tourism receipts. The effect on commodity prices, the extent of countries' scope for adjustment based on reserves and other variables and the dexterity in economic policy-making and management will also be crucial determinants of performance. Most likely, by hardening the balance of payments restrictions, the recession will force a tightening of the fiscal stance for Caribbean economies. This, in turn, may mean an increase in unemployment rates and decreases in output growth.