Home » Publications » Special and differential treatment in the FTAA
Available in: English

Special and differential treatment in the FTAA 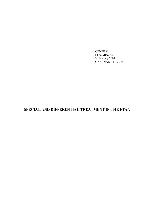 The need to devise an appropriate mechanism for the meaningful participation of smaller economies in the Free Trade Area of the Americas (FTAA); has been recognized since the beginning of the process of integration in the Americas and was articulated in the Plan of Action and Declaration of the Summit of the Americas, held in Miami in December 1995 (1); . Since then, the San Jose Declaration (2); reiterated the commitment of the countries of the hemisphere to ensure the full participation of the smaller economies in the FTAA and increase their level of development.
The declaration states that 'In designing the FTAA, we shall take into account the differences in the levels of development and size of the economies in our hemisphere to create opportunities for the full participation of smaller economies and to increase their levels of development'. Also in its
paragraph 6, the same declaration states 'We recognise that wide differences in the level of development and size of economies exist in our hemisphere and we will remain cognizant of these differences as we work to ensure their full participation in the construction of the FTAA'.
Similar commitments have been made more recently in the Toronto Declaration where it is stated in paragraph 5 'We recognise the broad differences in the levels of development and size of the economies in our hemisphere and we will remain cognizant of those differences in our negotiations
so as to ensure that these receive the treatment that they require to ensure the full participation of all countries in the construction and benefits of the FTAA. In order to comply with this, we instruct the TNC to begin immediately to examine the ways in which these differences could be treated in the negotiations taking into account the treatment given to them in other forums and provide continuing guidance to the negotiating groups and report to us at our next meeting' (3); . Although the recognition of the special case of smaller economies is clear, the negotiations are still to define an appropriate mechanism to carry out the commitments repeated over the last five years to ensure that the smaller economies of the hemisphere participate fully in and benefit from the FTAA.
Traditionally, special and differential treatment has been the chosen mechanism to address differences in the levels of development and promote the participation of lesser developed economies into the world trading system.
Not unlike the many declarations of the FTAA, the Preamble of the World Trade Organization (WTO); states that 'Members of the World Trade Organization recognise that one of the objectives of the WTO will be to ensure that developing countries members, and especially the least developed countries,
secure a share in the growth of international trade that is commensurate with their economic development needs. They also recognise that this objective will require a number of positive efforts from all members'. This paper will review briefly the special and differential treatment provided for developing countries in the WTO to address the issues related to the levels of development in a trade liberalisation context . This review is undertaken because of the relevance of the WTO's approach to the ongoing negotiations of the FTAA and based on the fact that that approach formed the basis for special and differential treatment in trade liberalisation agreements throughout the world. The paper will then highlight some of the major characteristics of Caribbean economies and their trade and make a modest attempt to point out selected issues which require special attention and which may contribute to a strategy for smaller economies of the Caribbean in the ongoing FTAA negotiations.