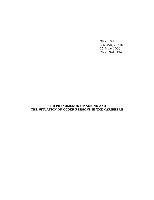 Background In its resolution 47/5 of 16 October 1992, the General Assembly decided to observe the year 1999 as the International Year of Older Persons (1) and to take note of the conceptual framework of a programme for the preparation and observance of the International Year of Older Persons in 1999, as contained in the report of the Secretary-General (A/50/114). In resolution 50/141 entitled International Year of Older Persons: Towards a society for all ages", the General Assembly, inter alia, invited the regional commissions, within the existing mandates, to bear in mind the goals of the Year when convening regional meetings in 1998 and 1999 at which to mark the Year and formulate action plans on ageing for the twenty-first century. Recognizing ageing as one of the major achievements and, at the same time, challenges of the twentieth century, the United Nations convened the World Assembly on Ageing in 1982 and, in the same year, the General Assembly endorsed the International Plan of Action on Ageing (resolution 37/51). In 1990, the Assembly designated 1 October as the International Day for the Elderly (resolution 45/106) and one year later, in 1991 it adopted the United Nations Principles for Older Persons (resolutions 46/91). In 1992, the Assembly adopted a practical strategy for the decade 1992-2001 entitled 'Global targets on ageing for the year 2001" (resolution 47/86). In elaborating the conceptual framework of a programme for the Year, four dimensions emerged which are discussed below. The objective of the Year of Older persons was the promotion of the United Nations Principles for Older Persons, their translation into policy, as well as practical programmes and actions. 1 The term older persons rather than elderly is being used in the present report, as it was in General Assembly resolutions 47/5 and 48/98. In the fiftieth session of the Assembly by resolution 50/141 the term elderly was replaced with the term older persons."