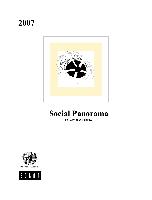 Per capita GDP has grown more in 2003-2007 than at any other time since the 1970s. ECLAC projections indicate that this trend will continue in 2008, which will thus be the fifth year in a row in which per capita GDP has risen at over 3% per annum. This increase has made further progress in poverty reduction possible, together with a decline in unemployment. Some countries have seen improvements in income distribution as well. A number of problems persist, however, and Latin America continues to lag behind other regions in various areas. Levels of social and economic inequality remain extremely high. After rising sharply during the past decade, social expenditure -measured as a percentage of GDP- has been levelling off and continues to fall short in terms of the coverage of existing social needs. In addition, migratory flows continue to be spurred by unequal levels of development in various locations and areas within individual countries. The Social Panorama of Latin America 2007 provides the latest poverty estimates available for the countries of Latin America. These estimates indicate that 36.5% of Latin America's population (195 million people) were poor and 13.4% (71 million) were extremely poor.