Latin America and the Caribbean in the World Economy 2011-2012: Continuing crisis in the centre and new opportunities for developing economies 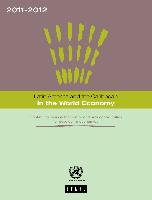 Latin America and the Caribbean in the World Economy 2011-2012: Continuing crisis in the centre and new opportunities for developing economies

The 2011-2012 edition of Latin America and the Caribbean in the World Economy, which focuses on the theme of continuing crisis in the centre and new opportunities for developing economies, is divided into four chapters.

The first chapter examines the difficult international economic situation and the outlook for the rest of the decade. The global economy is facing difficult conditions again in the second half of 2012, with the epicentre in the euro zone. A number of European economies are mired in deep recession and their governments are having serious difficulties in reconciling the need to regain growth with the urgency of reducing their high levels of deficit and debt. As a result, mounting uncertainty and turmoil are sapping a global recovery that is already the weakest in 40 years. Although the United States is performing somewhat better than the euro zone, its recovery remains fragile. Moreover, its economy could slip back into recession in the first quarter of 2013 if major scheduled tax hikes and spending cuts go ahead.

Over the next few years, the developing countries, particularly China and other emerging Asian economies, will continue to be the main engine of the global economy and trade, while growth in the industrialized countries remains slow and volatile. The industrialized countries still have some way to go in reducing household and public sector debt. During this process, which could take another three to five years, financial constraints seem likely to continue, as do stringent fiscal consolidation and public debt requirements, short and erratic recoveries, high unemployment and further public sector interventions in finance and the economy.

Regarding trade policy in this complex international scenario, restrictive global trade practices remain at moderate levels. However, there are significant risk factors that could increase trade restrictions. In trade negotiations, the protracted stagnation of the Doha Round of the World Trade Organization (WTO) has accentuated an already strong tendency towards negotiating preferential agreements. Much of this activity involves the economies of Asia and the Pacific. Lastly, attention is drawn to a number of recent trade disputes at WTO.

Chapter II takes stock of the boom in commodity prices that began around 2003 and its evolving impact on the value of the region’s exports, drawing particular attention to the growing role of developing Asia, especially China, as a destination for commodity exports from Latin America and the Caribbean. It then examines the foreseeable impact of three scenarios (neutral, optimistic and pessimistic) in terms of commodity export prices and demand from the region’s major trading partners in 2013-2015, focusing on the 10 main groups of commodities (oil, copper, iron, soybean, coffee, sugar, fisheries products, meat, fruit and gas) and their derivatives, which together account for more than 40% of the region’s total export value. The resulting projections show that, even in the pessimistic scenario, prices for the region’s main export commodities will remain above their historical averages, even though they could fall by as much as 9% per year (especially in the case of minerals and metals). The value exported by the region will continue to rise during the next four years at annual rates ranging from 0.7% to 10.5% in the pessimistic and optimistic scenarios, respectively, and 5% in the neutral scenario. As a result, the countries in the region will have to work harder to increase their export volumes, if they are to maintain export earnings.

Chapter III looks at recent performance and the short-term outlook for trade and economic integration in the region. It analyses foreign trade trends in Latin America and the Caribbean in 2011 and 2012 by main trading partner and category of product for the region overall and for the subregions, finding a sharp slowdown starting in the second half of 2011. In fact, in 2012 exports and imports are likely to edge up by just 4% and 3%, respectively, owing, among other factors, to the crisis in the euro zone, weak growth in the Unites States and Japan, and modest growth in China and other emerging economies. This chapter also examines the main developments over the past 12 months with regard to the various integration processes under way in the region. On the one hand, there are no widespread moves to increase trade restrictions. On the other, some of the region’s economies are continuing to sign new trade agreements at a rapid pace with partners in the region and beyond. Lastly, a number of shifts have taken place in the region’s formal economic integration architecture.

Chapter IV examines the international integration of Latin America and the Caribbean in relation to the trends discussed in the rest of the document. Three dimensions of the region’s export performance are analysed: (a) value chains, (b) employment generated by the export sector, and (c) export firms. Briefly:

(a) The examination of the region’s participation in value chains looks at the role of the maquila sectors and duty-free zones, as well as trade in intermediate goods. In light of these indicators, it is concluded that, relative to other regions, particularly Asia, Latin America and the Caribbean is lagging behind in terms of integration into global value chains.

(b) Employment generated directly by the export sector is analysed, as well as jobs linked indirectly to export firms. The study performed for six countries suggests that export-related employment represents a significant and growing percentage (between 12% and 24%) of total employment.

Two types of policy recommendation are offered by way of conclusion. First, it is important to develop policies for bolstering intraregional trade, which is well placed to drive a process of structural change with equity. This is because it plays an important role in export diversification, industrial development and direct and indirect job creation, and it is less concentrated than other types of trade by firm and involves a larger proportion of small and medium-sized enterprises. Second, initiatives are needed to tap the potential for trade and investment with other emerging regions, especially Asia, and to foster a quality leap in those ties.

Summary.-- I. The complex reordering of the global economy.-- II. The commodity boom: analysis and outlook.-- III. Trade and economic integration in Latin America and the Caribbean: recent performance and short-term outlook.-- IV. The global economic outlook and the challenges it poses for the international integration of Latin America and the Caribbean.